The Best Time To Visit Alaska: A Year-Round Planning Guide

Local Alaskans have a saying about the state’s four seasons: there’s almost-winter, winter, still-winter, and construction.

Jokes aside, America’s 49th state enjoys periods of pleasant weather that attract travelers excited to visit jaw-dropping destinations like Denali National Park and the fjords of Kenai. But while the state is home to countless incredible natural wonders, understanding how to navigate the reliably cool weather is essential.

It’s hard to pick the absolute best time to visit Alaska because each season has something that makes it special. It ultimately will come down to personal preference and what’s on your Alaska bucket list. So when trying to plan out your Alaskan adventure, be sure to investigate the best things to do, average temperatures, and the number of daylight hours of each season.

This guide dives deep into everything you should know about the best time to visit Alaska.

Related read: 9 Best Places to Stay in Alaska for the Ultimate Getaway

The Best Time of Year to Visit Alaska

Whether you’re coming to hike under the summer sun or want to immerse yourself in a winter wonderland, Alaska has a distinct season that best suits your plans. Here’s a breakdown of what to expect for each season in Alaska.

Although summer is short-lived in Alaska, it’s ultimately one of the best times to visit for outdoor activities like camping and hiking. The mountains come alive with greenery and the snow melts, allowing for kayaking adventures in the fjords and treks to tall peaks.

Alaska’s summer season sees pleasant temperatures that can range between 60 to 80 degrees F, sometimes even reaching highs in the 90s. With the summer also comes long daylight hours and the mind-blowing midnight sun. Aptly named, the midnight sun is a phenomenon that only occurs in places in the Arctic Circle. It’s when the sun sits on the horizon at midnight.

Summer is also one of the best times to visit Alaskan cities such as Anchorage, Juneau, Seward, and Kenai. The pleasant weather means more options for tours and activities, and local restaurants and shops are open and ready to host. Driving scenic highways and byways is another popular thing to do, and they’re safe and clear in the warmer months.

Unsurprisingly, warm temps and long sunny days draw many visitors to Alaska in the summer, making it peak tourist season. The summer also experiences the highest amount of rainfall, which on average is a bit more than the contiguous states.

Autumn weather descends quickly over the state, lasting not much longer than a month or so. The days begin to grow darker, temperatures start to fall, and wildlife shift into hibernation mode. The average fall temperatures in Alaska range between 40 and 60 degrees F, offering a comfortable temperature for hiking and other outdoorsy activities.

Although many excursions and attractions close in October in preparation for the coming winter, the Alaskan landscape comes alive with vibrant oranges, reds, and yellows. You won’t find the traditional leaf changing show associated with autumn, but rather a change to deep red in the grasses and foliage in the tundra and a bright display of yellow as birch leaves fall. If you do want tours, consider visiting in September, not October.

If you love to fish, autumn also continues to rock excellent silver salmon, rainbow trout, and steelhead trout fishing opportunities in Alaskan lakes. Just be sure to pick up a local fishing license.

Autumn is also a fantastic time to visit Alaska to avoid the crowds. It is shoulder season, which means attractions are emptier and prices are lower. The coming of September also means the beginning of northern lights season, offering visitors a chance to catch the sky alight with vibrant waves of colorful light.

Winter in Alaska is not for the faint of heart. Heavy snowfall blankets the land and temperatures drop to stark lows. The coastal and south-central regions of Alaska tend to stick around 20 degrees F, whereas the Arctic regions can reach staggering lows that drop well below –20 degrees F.

But if you’re a winter sports enthusiast, there’s no better time to be in Alaska than in the winter. People come from around the world to indulge in the world-class ski slopes, hit the snowmobile trails, and try their hand at dog mushing (Alaska’s official state sport.) Denali National Park is still open for visitors; however, many facilities and trails see seasonal closures.

Winter in Alaska is also the best time to witness the beauty of glaciers and the northern lights. Also known as the Aurora Borealis, it’s a phenomena caused by electrically charged particles colliding with atmospheric gasses. The reaction manifests as streaks of visible and colorful light.

The northern lights actually occur year-round in the north, but because of cloud coverage and light pollution from the midnight sun, it’s impossible to see them in the summer. However, under cover of winter’s immense darkness, viewing opportunities become much better. The best time to see the northern lights in Alaska is between mid-September and late April, before the return of longer days.

Spring (April – May): The Best Time For Wildlife Viewing

Alaska is still frozen for much of spring and doesn’t complete its annual thaw until around April in the south and as late as early June in the north. Daylight hours slowly begin to increase in February as well. Springtime temperatures typically range from 29 degrees to 44 degrees F, offering a chilly (yet not wholly freezing) time to visit.

Spring’s cool temperatures create an excellent time to take in wintery sights without winter’s insanely cold weather. There’s also a good chance there will be enough snow for winter sports like skiing and fatbiking. April and May also offer up the driest and clearest months in Alaska, promising dry and sunny weather that won’t halt your exciting plans. But the best reason of all to visit may be because spring is still shoulder season in Alaska, creating lower prices and fewer crowds.

With the promise of warmer weather on the horizon, local wildlife begin to crawl out of their hidey-holes. Spring is an excellent time for moose or bear sightings without the obstruction of foliage, and you may even glimpse a newborn animal. Be sure to keep a safe distance away from Alaskan wildlife and be sure you’re bear aware.

This is also the best time of year for whale watching as packs of whales begin their return to the Alaskan waters. Cruise tour companies reopen in spring, offering opportunities to spot ocean wildlife such as otters, walrus, seals, dolphins, and more.

So When Should You Visit?

Unfortunately, there’s no one right answer when it comes to deciding the best time to visit Alaska. Alaskan weather can be unpredictable and it’s impossible to plan for every possible weather scenario. But as long as you come with an adventurer’s spirit, you can trust you won’t be disappointed with the staggering beauty of America’s Last Frontier.

The 10 Best Airbnbs in Anchorage, Alaska

Brittany is a freelance travel writer and avid photographer with a love of hiking and nature. Originally from Wisconsin, she fell in love with travel blogging after living and teaching English in South Korea. She’s now location independent and enjoys slow travel to new and exciting places.

You can follow along with her adventures on Instagram or her travel blog Lifeofbrit.com, where she shares helpful travel guides and budget tips for solo female travel in Asia and beyond. 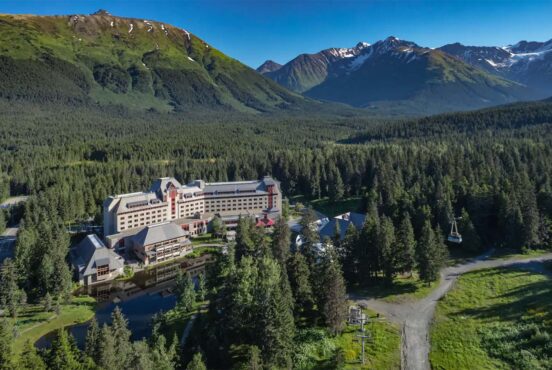 Home to the tallest mountain in the U.S. and the glacier-filled waters of Kenai Fjords, Alaska’s natural beauty needs no introduction. 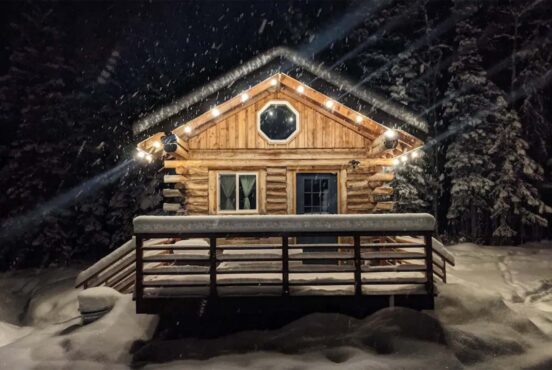 Alaska is enormous, and it’s only of the last few places on Earth where you can find true solitude. 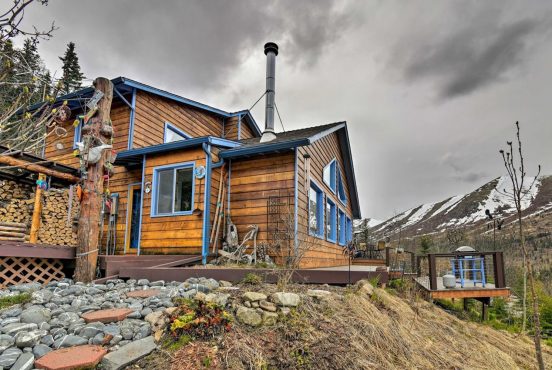 Have Alaskan reality television shows given you a bad case of cabin fever? Then you've come to the right place. 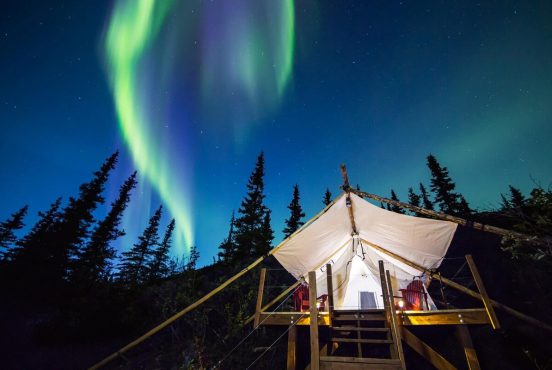 Go glamping in Alaska and you can explore the exciting natural attractions of the Last Frontier, but still come back to a heated space and cozy sheets. 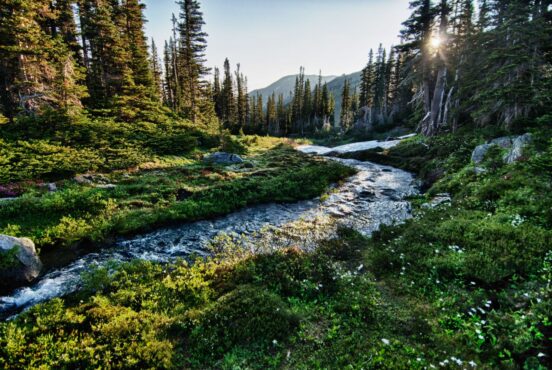 The United States is home to some of the most diverse and dramatic landscapes on the planet, many of which are preserved “for the benefit and enjoyment of the people.” Lucky us. 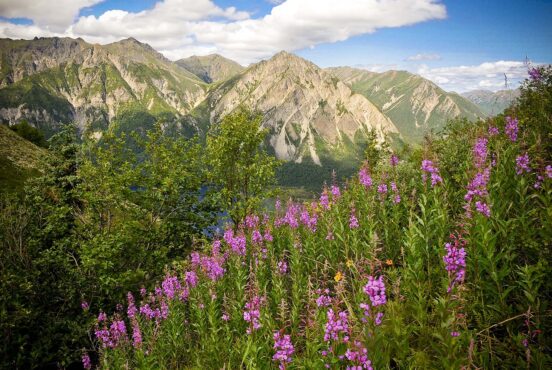 For intrepid adventurers who feel that a simple road trip to Yosemite is a snooze and who’d rather spend their summer gazing at grizzly bears, climbing glaciers, and hiking through vast, untrammeled tundra, the Alaska parks are heaven. 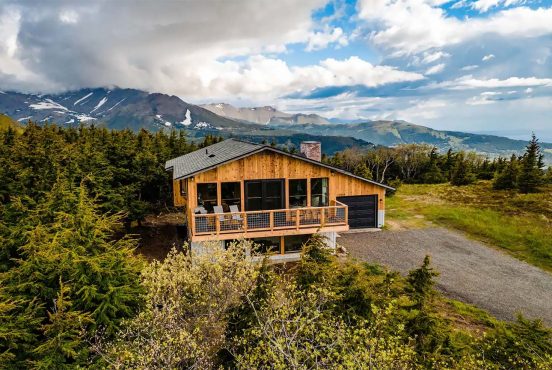 9 of the Best Airbnbs in Anchorage, Alaska

Grab an airbnb in Anchorage, the perfect spot to experience the Last Frontier and its wildlife while enjoying city attractions and the comforts of home. 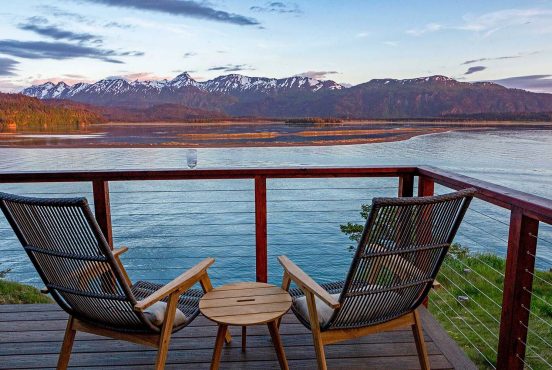 Ditch your standard lodging for a one-of-a-kind vacation rental that you'll be bragging about at the water cooler for years to come.